I'm finding it difficult to write naturally about the race so I am resorting to a contrived Race Analysis form, which I found in my training log from the summer before my senior year of high school that my then coach, Jon Gordon, put together. I'm not sure where this form comes from so if you know, let me know! 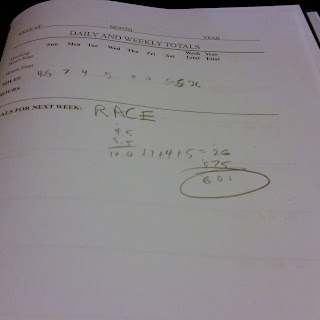 I logged 601 miles in 14 weeks that summer. This year in the 13 weeks leading up to the Chicago Marathon I logged 1064 miles.

A lot has changed since I started this blog while training for my fourth marathon, the 2013 Chicago Marathon. I've grown and learned about the marathon and life though I'm still far from master of either. Throughout the last few years, I've really grown to appreciate the support of those near and far, on and off the course. My 2014 Chicago Marathon Race Recap catalogs all the friends and family on course. Looking back at it now, I'm no less thankful, but it does come off as a bit obnoxious. This aside, thanks for your support! I hope you enjoy this race recap. 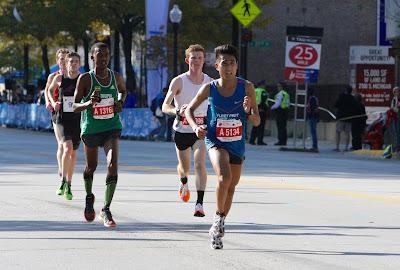 Number of hours sleep 48 & 24 hours before race:
7-8 & 6.5 respectively. Honestly, I'm not 100% sure. This would be in alignment more or less to my typical sleep patterns throughout training.

Food eaten before race, and when (Note: I didn't write this form, what strange wording!):

Morning of
5:10am - 1 packet pomegranate-blueberry Generation Ucan immediately after 1 mile shakeout jog, normally I wouldn't take anything, but since I had practiced with this product with no ill GI effects and it has minimal impact on insulin response (impacting fat burn), I decided due to my light dinner the evening before I should top off my energy stores.

Evening Prior
7:30pm - 4 small Gala apples with ~4 tablespoons almond butter, the body didn't feel like eating a large dinner since I had a late lunch. I wanted to get some fiber in the system, too.

I don't recall what I had for breakfast, but it was probably
8:30am - 2 bowls of cereal with almond milk

Type of warm-up carried out:
1 mile shake out run done 2.5 hours prior to race start. ~1 mile walk to start corral including some very light jogging. Temps were cool, but not chilly/cold.

Tactics in early stages of race:
My goal was to settle into 5:48-50 pace with as little drama as possible. Cole and I started in the A Corral together. Cole stuck right on my shoulder as we navigated the crowded, adrenaline-filled first mile. I think we split about 5:40, but then quickly got things under control. Our 5k split was 18:08 or 5:50 pace so we were exactly where I wanted to be. Also within this first 5k, we ran into my friend, Rich Heffron. Rich and I have similar marathon PRs and had planned on trying to work together in this year's race. In addition to Rich and Cole, I found myself in a group including some other Chicago guys, Dan Regalado and Matt Thor. 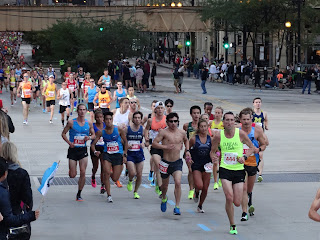 Our group at about 2.5 miles into the race.
photo credit: Felipe Lopez

Things stayed relatively consistent for us through half way which we passed in 1:16:12 which is right at 5:50 pace. Shortly after this, our group started to splinter apart, but I was feeling relatively comfortable and continued to enjoy the company of Rich and Cole.

At what point discomfort set in:
After the halfway point, I held steady a few more miles, then started to ratchet the pace down a bit. I figured if we were to run under 2:32, now would be the time to start getting time back. After a few 5:45 miles though, I could tell maintaining this tempo would be challenging. Still nearly 10 miles out from the finish, I relaxed and tried to maintain the previous tempo of ~5:50 pace. Surprisingly Rich, Cole, and I were still running together.

After 30k, around mile 19 or so, I noticed that my arches and the medial portion of my calves were beginning to cramp. From this point onward, I would experience cramps that would lock up my foot and calves (more on the right than the left) for about 20 steps at a time every mile or so. At this point, Cole had dropped back and it was just Rich and me with Monika Juodeskaite trailing us. Running through Pilsen, dealing with cramps, I knew I was slowing down slightly and prepared for Rich to run away from me. Ultimately though, this never happened as we traded leads a number of times in the last 10k down to the final stretch on Columbus with Rich overtaking me in the final stretch.

I thoroughly enjoyed running nearly step for step with Rich since we've done a number of runs and races together over the past couple years: 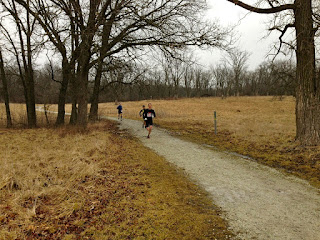 It's pretty rare for two runners to be able to set out to run a race together, but that's pretty much what we did and I wouldn't have run as well without him!

Whether absolutely maximum effort was made:
Wow, this analysis sheet doesn't pull any punches! I believe I made the maximum effort. It's a bit tough to say when you're dealing with something like calf cramps. I  felt like at times I might be able to run a bit harder, but at the same time I didn't want to push too hard and pull something.

In the early stages, I made a conscious effort to keep the pace in check; in alignment with my fitness. I also made a conscious effort to slowly push the pace after halfway to put myself in a position to set a PR. So in these aspects of execution, I would say I made the maximum effort. I then maintained what I thought was maximum sustainable effort when I became hampered by calf cramps, being willing to sacrifice 5-10 seconds/mile in the last 10k in order to prevent a catastrophic injury that would prevent me from finishing.

How long it took to recover:

(A) From immediate exhaustion:
1-2 hours.

(B) Completely:
Three days later, I'm still a little tired, but not sore at all. Initially (Monday morning), my left arch was completely frozen up. This is my problem arch. I rolled out my calves and did a lot of walking and biking which helped a lot. I'm planning on resuming running on Sunday, but not resuming any formal training for some time.

Type of cool down carried out:
Minimal cool down. Approximately 1 mile of walking immediately after the race. 10 minute massage targeting the calves, quads, hamstrings, and upper back.

What can be learned from this race:
Rich, who runs for Dick Pond/Fast Track, is the best teammate I never had. Team rivalries are fun, but in the long run (haha), working together to achieve our goals and building friendships is even more fun and productive. I'm also thankful for Dan, Matt, Cole, and the other members of our initial group who helped keep the pace rolling along in the earlier miles.

I forgot to hydrate well enough prior to the race. I think this may have contributed to the cramping I experienced. I changed shoes because I experienced some foot cramps in my last 4-5 marathons or so, but these were by far the worst I have experienced yet. I have trouble replicating them in practice as I think they're a function of dehydration and running for a long time at race pace.

My calves were also the issue in this past year's Boston Marathon. Over the off season, I would like to work on lifting and plyometrics targeting the calves/lower legs to help prevent future issues.