Since I'm going away for the weekend, I want to make sure I get some thoughts written down about this race. 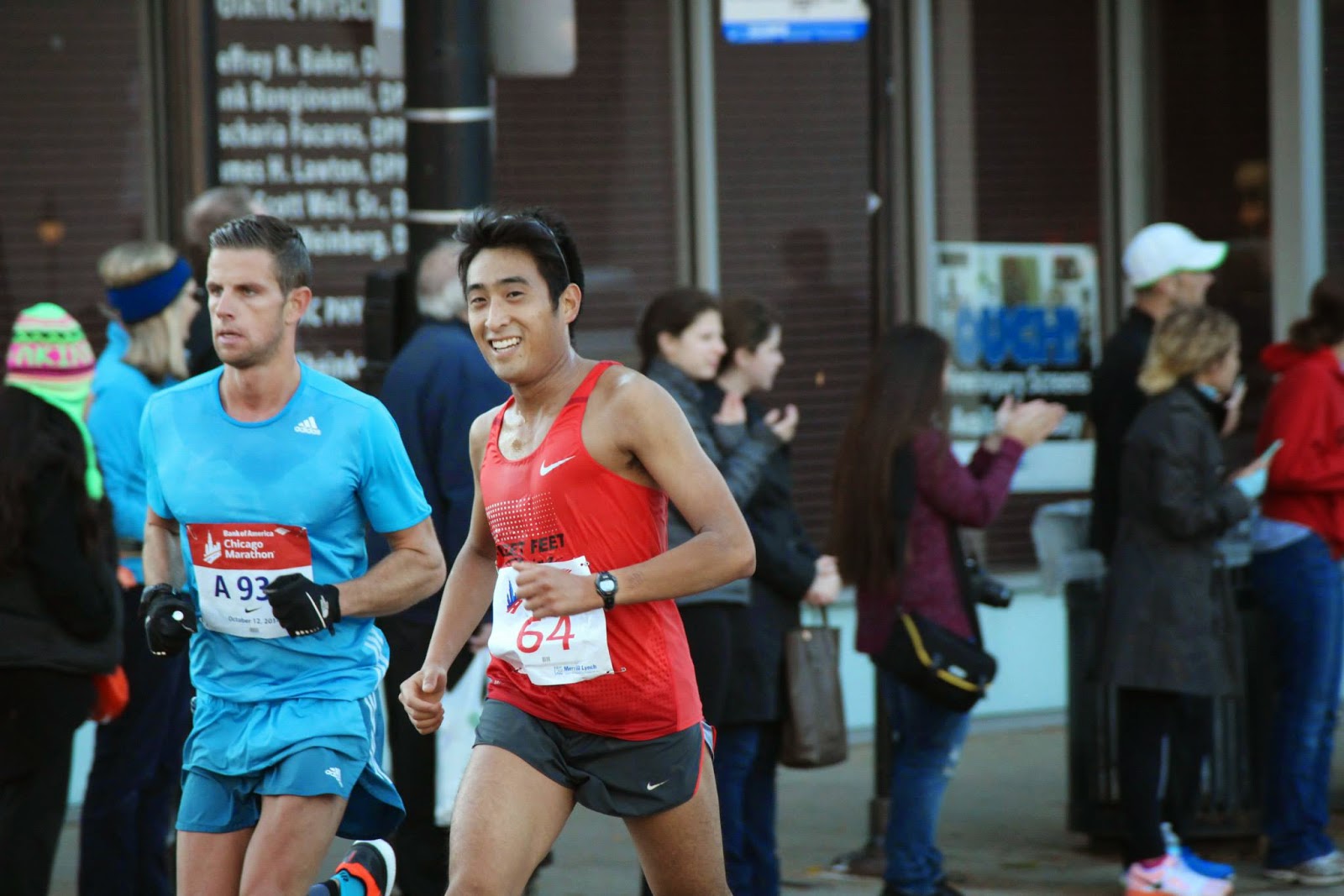 "To enjoy the streets of Chicago you need to smile.
With all these people you need a big smile."
- Eliud Kipchoge, winner of the 2014 BoA Chicago Marathon (among other things) via LetsRun.com
photo credit: Ruben Gonzalez

First off, thanks for your support!

There is no experience like running your hometown marathon, the crowd support is amazing. I was perhaps more acutely aware of this as my last couple marathons were away from home (Boston and Grandma's).

Running the streets of Chicago this year was like a stroll through my running past as I saw and heard supporters from my earliest years as a runner to the present. My family of origin, my parents and youngest brother, have spectating the Chicago Marathon down to a science. I started running in 2002 when my dad was training for his first and only Chicago Marathon. High school teammate Danny Garcia and coach Humberto Gutierrez, two of the few people I knew who had run the Chicago Marathon in my earliest running years were on the course cheering.

Moving on to my friends from undergrad, there were tons of guys from the Illinois Cross Country and Track Club cheering (Aaron Silver, I needed that pick up in those last couple miles) and racing. Congrats to my former training partner Declan McDonnell for pulling what Matt Newman called a "Kittaka" and debuting in 2:35 as well as throwback racers Matt Peharda and Ryan Tripicchio! I also saw some former River to River Relay buds including JMac (dude, someone else was totally racing in a NBA jersey this year), Kyle Somerfield, and Brent Chatham.

My description of supporters from my Fleet Feet days could probably go on for several paragraphs, but I will say it is always a pleasure to run through mile 10. I enjoyed seeing Catherine Moloznik, Cole Sanseverino, Shawn Lucas, Krissy Czapanskiy (and Bill!), Matt Curley, Peter Mone, and of course Mark Erspamer. Thanks for the pics, Ruben Gonzalez and Lyndsey Baum!

Heh, this is getting long but it's a pretty interesting, at least for me, to review how running is defined by the folks you share it with. It was great to have Bana Negash out there on course. Thanks to TTAU's Michael Martineau for some sweet pics and Mark Wehrman for the company. And finally, thanks to the crew from Bootleg Runners Coalition for the Rainbow Dash, helium pick me up and Jeff Edmonds and crew at the BibRave cheer station for the encouraging words!

I've undoubtedly left more than a few names off the list, but you get the point. I mentioned this in my BibRave review of this year's event, but it bears repeating, 2014 had the best crowd support in the toughest areas of the course in my four years running the event (2010, 12, 13, 14). This of course could all be my distorted memory as 2014 was my fastest Chicago Marathon of the bunch, but I think there is still some truth in there somewhere.

Now onto the actual race itself.

If you want to run low 2:30s, run with the ladies as they tend to be smarter racers than men!
Also: Twin Anchors!
photo credit: Michael Martineau

I started a bit quick. I'm not sure how I missed the first mile split, but I ran what felt like a relaxed split with my teammate and fellow pretzel aficionado, Kyle Larson who was guiding vision impaired athlete Aaron Sheidies. From there things got rolling pretty quickly as I keep the pace under 5:50 through the first 10k, splitting 35:52. The wind was out of the south so things felt pretty relaxed and I dropped my gloves when I saw my folks near LaSalle and Chicago (mile 4).

After turning south at Addison, I could feel that the legs weren't too happy running 5:45s into the wind. I let the pace sag a bit to let my body relax remembering that there was still 19 miles remaining in the race! At this point, I was caught by a group of women including Hansons-Brooks' Melissa White (see Michael's photo). They were probably running high 5:40s while I kept things controlled and stayed comfortable, biding my time until after the half-way point. I was relatively comfortable, but not feeling particularly smooth which was concerning considering the hot early pace and bad memories from previous years. I recalled my general race plan to stay relaxed through mile 15, then reevaluate my goals for the remainder of the race.

Passing half-way in 1:16:17, I tried to stay optimistic. Based on how I was feeling, it would probably not be possible to negative-split the way I had intended. Not only that, but the miles following were exactly where my races the past two years completely unraveled. I found confidence in my ability to continue running (relatively) relaxed 5:50s. Over the summer, I had been bike commuting pretty much everyday, logging 3-5 hours of easy riding per week. This additional aerobic activity helped keep me healthy while maximizing my aerobic capacity however it also introduced more muscle fatigue as my rides and runs often butted up against each other. During training and racing leading up to the marathon, I noticed that it was difficult for me to maintain fast paces, but my ability to run 5:50 pace was nearing the level it was at when I set my marathon PR nearly four years ago in Dallas.

Mile 15 came and went and while I didn't feel great, I also wasn't blowing up. Modeled after Dan Daly's segmentation of the Boston Marathon I used in April and again at Grandma's, miles 15-22 or so are run by feel, focusing on staying relaxed and maintaining the effort. For Boston, this section is comprised of the Newton Hills, culminating in the legendary Heartbreak Hill. For marathons in general, these represent some of the toughest miles for a variety of physiological and psychological factors that I don't have space to discuss at the moment. I ultimately decided it was easier to think about the segment as through mile 21 (where I'd be taking the last of my three GU energy gels, I take one every 7 miles in case you wanted to know).

I honestly don't remember much about this portion of the race with the exception of feeling my form breaking down and slowing slightly. The steps no longer came easily. They were labored and there was nothing I could do to loosen things up. I felt like the Tin Man with no oil. In fact for about 30 seconds or so the arches of my feet cramped up.

Despite all this, I was able to get past miles 21 and 22. I believe it was at this point that I did the math and calculated that as long as I didn't blow up, I'd be able to clock in under 2:35. This quick calculation lifted some of my anxiety. I did not feel very good and couldn't run any faster, but I also felt like the pace I had been more or less maintaining could be maintained through the finish. With this and the wind from the south in mind, I decided to make a go at a faster finish once I turned north on Michigan Avenue. Of course seeing my family near 33rd and my friend Mark Erspamer on the 33rd Street Bridge also helped keep me motivated. 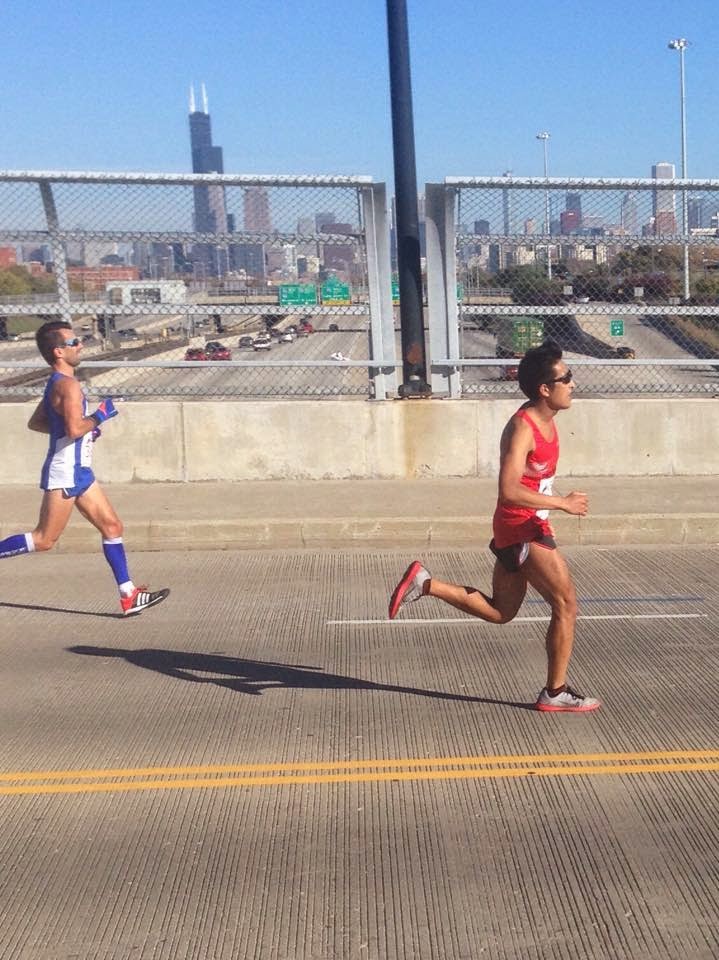 Struggling to maintain pace on 33nd Street.
Also this photo proves that this is in fact the Chicago Marathon.
photo credit: Mark Erspamer

While I told myself turning onto Michigan Avenue would be a relief, in fact it was just the opposite. This nearly penultimate mile and a half long stretch would determine the result of the run. Anxiety mounted. I wasn't sure I could hurt all the way to the finish. I did my best to pick up the pace, but I was probably just maintaining if not just slowing ever so slightly. To battle doubt, I verbalized a few times, "I can do this" and tried to accept the shouts of encouragement. Corny, I know. In my head, I knew my body could run 5:59 pace or whatever for another 10 minutes, but my body was trying to convince me to relax and slow down.

I ran a terrible Mt. Roosevelt as my form had deteriorated into a wavy mess and the race was over.

I finished just 15 seconds off of my time at Grandma's Marathon. I thought I was in slightly better shape this time around, however as I mentioned earlier, I've been having a difficult time running faster paces (5k and half-marathon pace). The improved running economy at marathon race pace that comes along with running at faster paces was one of the biggest limiting factors of my Chicago Marathon performance in my analysis.

Ultimately, I am very happy with my 2014 marathon season. I started in the Lincoln Square Athletic Club pool way back in January after not being able to run most of October, November, and December 2013. Boston snuck up on me, but it was also the first marathon in three attempts and three years where I arrived on the starting line without major lower leg pain. Grandma's Marathon reinforced the marathon segmentation strategy I had applied to Boston and resulted in my second fastest marathon ever and my first marathon negative split. Finally, this run in Chicago redeemed the past two years where I wasn't within 9 minutes of my best. My run in Chicago set a new standard of marathon performance consistency.

My goal for 2014 was to get in a full year of healthy running and racing, building a platform on which to break 2:30 in 2015. I feel like I got much more than I expected as I developed a better support structure (thanks, friends), learned an effective way to segment and execute marathons, and broke 2:34 twice. Looking ahead, I am hopeful for success and excited to find my speed again.

Check out my splits here.
I don't have Strava data because I don't use a GPS watch for marathons.

Thanks again for your support!

What are your goals for 2015 and how do you plan on achieving them?
Posted by Dan Kittaka at 9:16 PM 2 comments:

Hi all, have you ever broken a race in to segments in order to run your best?

My calculator takes all the arithmetic out of segmenting a race by pace. Simply entered the distances of your race segmentation (in miles or kilometers!) and the pace in minutes per mile you'd like to run each segment and the calculator does the rest! You'll get a segment split time as well as your total time.

This allows you see how running difference paces based on course conditions and other factors effects your overall total split times and finish time.


Here's a copy of my Race Finish Calculator that you can save off for yourself.


What do you think?

Posted by Dan Kittaka at 8:31 PM No comments: