In studying for my CPIM certification exams, I have come across the concept of hansei, one of the twelve pillars of the Toyota Production System (TPS, a structure of management philosophy and practices) and more generally a characteristic of greater Japanese culture (or so I've read).

hansei –“reflection,” or "self-reflection," becoming aware of and acting on opportunities for improvement. 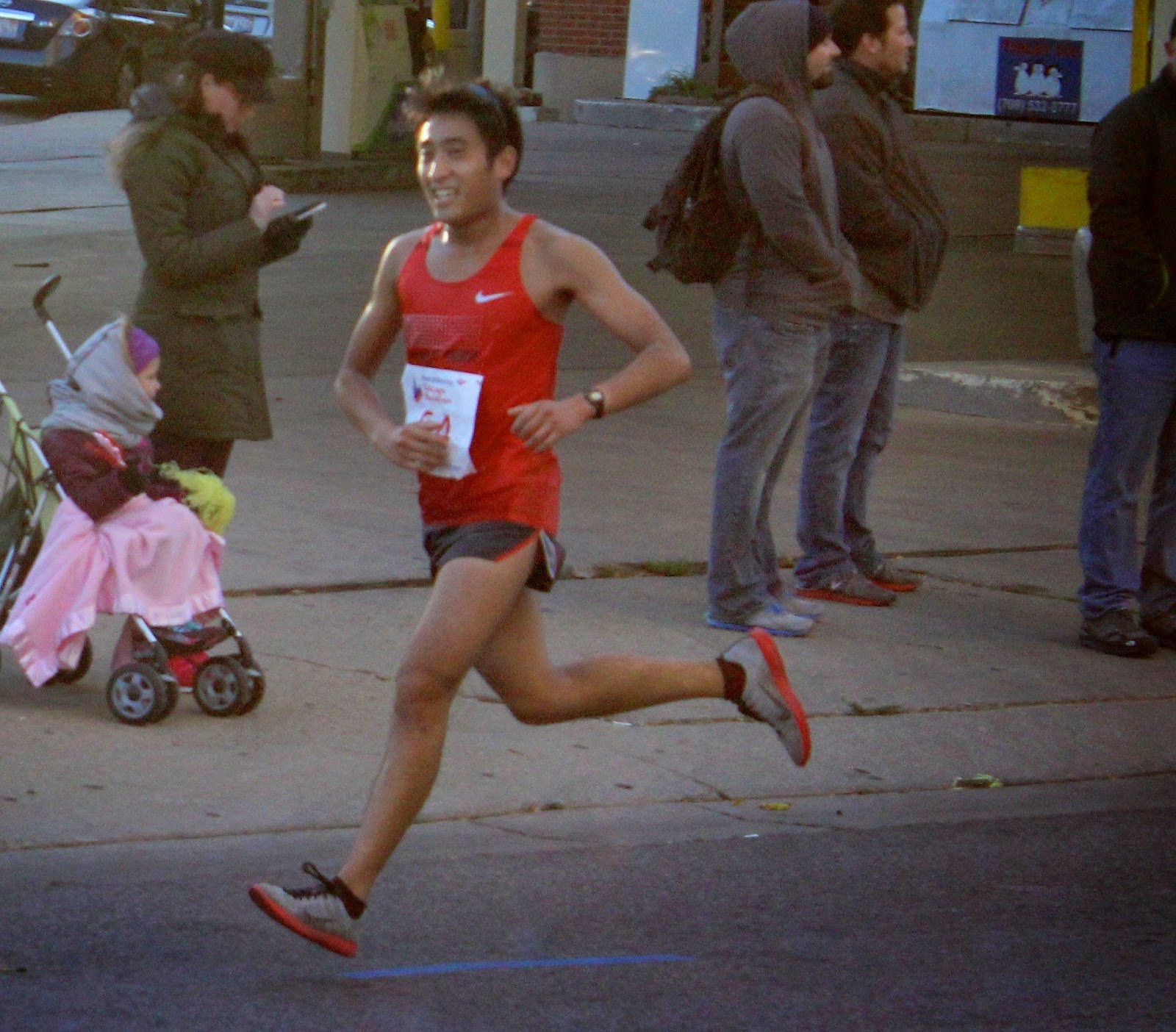 In the TPS, both successful and unsuccessful initiatives are followed by a hansei-kai or reflection meeting. The UK Toyota blog elaborates a bit on this:

"An inability to identify issues is usually seen as an indication that you did not stretch to meet or exceed expectations, that you were not sufficiently critical or objective in your analysis, or that you lack modesty and humility. Within the [h]ansei process, no problem is itself a problem."

Lest we become fixated on our failures (even to exceed expectations), it is important to note that the end goal is ultimately to drive positive change. Let me restate this, the goal of hansei is to improve.

For me it can be easy to get stuck in the first step of uncovering and accepting responsibility for failure, but miss the end goal of positive change. One western blogger living in Japan describes hansei in action. He notes how that the goal was not to place blame or make apologies, but, after accepting responsibility for failure, to improve the team.

All of this is a long way to introduce this latest blog post reflecting on my running in 2014 and my preliminary plan for improvement.

I want to keep this initial, annual reflection short as I already include periodic reflections (this of course being one of the purposes of blogging one's training/racing), and I want to emphasize the changes in place and planned. Since the focus of training is racing, I will focus on racing performance.

Early in the year, I started on par with a decent (for me) 3k indoors and my fastest Shamrock Shuffle to date. With these exceptions, I struggled a lot at races that weren't marathons, failing to run faster than 16:27 in the 5k, posting a mediocre 56:17 at 10 miles, and running only marathon pace for the half-marathon. At this juncture, it is important for me to post some faster times at shorter distances both from a physiological as well as psychological standpoint. My result from the Chicago Marathon underlines this point, every mile split was between 5:40 and 6:00. My aerobic strength pulled me through. To capitalize on this strength in 2015, I need to get comfortable running at faster paces.

My plan to get myself to run faster paces features several key components:

In the near term, I am focused on getting into the best 5k shape possible for a 5000m race at Lewis University's Illiana Invite on January 16th. This involves using long runs for aerobic maintenance (instead of race-specific training) and introducing 5k pace and faster repeats, a bit more on this later. Looking further out, I would like to break 26:00 at Shamrock Shuffle. As the season progresses I will set more specific goals, but I plan on running the Soldier Field 10 Mile, the Big 10 10k, and the Bix 7 later in the year.

Injury has been one of the primary factors preventing me from achieving the best of my ability. I am implementing Jay Johnson's now famous Pedestal and MYRTL routines in an effort to strengthen my core and hips, the "chassis" that allows you to take advantage of your aerobic "engine." [This analogy appears in Jay Dicharry's Anatomy for Runners].

I am also going to spend some money and time doing key workouts indoors at DePaul's Rec Center, purchasing the 10 Visit Package (for $110). After experiencing soreness after running sub-7 minute pace earlier this week while it was 15 degrees outside, this plan is only further validated. It is difficult to get fully warmed up when the temperatures drop leading to additional muscle soreness and potential injury.

3) Establish a plan for running faster.

I've not been a huge subscriber to laying out a week-by-week season plan as I've felt like incorrectly calibrated, these types of plans have contributed to disillusionment and injury. That said, I have received benefits from following a rigid schedule when participating in the Boston 365 program (which I'll be co-coaching for 2015!).

Here's the plan I've outlined (based on a Jack Daniel's program) for the following weeks (weeks start on Mondays):

Also don't forget, the fourth installment of Two-Something: The Backgrounds, Beliefs, and Secrets of Sub-Three Hour Marathoners comes out tomorrow!
Posted by Dan Kittaka at 4:40 AM No comments:

The Fellowship of the Lakefront Trail

"[Bilbo] used often to say there was only one Road; that it was like a great river: its springs were at every doorstep, and every path was its tributary. 'It's a dangerous business, Frodo, going out your door," he used to say, "You step into the Road, and if you don't keep your feet, there is no knowing where you might be swept off to.'" [p.74, The Fellowship of the Ring]

It has been some time now that I've thought about what it might be like to run the entire Chicago Lakefront Trail (LFT). I believe it has something to do with learning about Fastest Known Time or FKT runs in places like Zion National Park or Kilimanjaro in Tanzania. A point-to-point-to-point of the LFT (18 miles one way) posed a reasonable next step beyond my experience running the Lakefront 50/50 50k. I do recall discussing with Matt Flaherty or Rich Heffron or both at some point the existence of a Known Time for this run on the LFT. They weren't aware of a posted time. I also checked what appears to be the hub of FKTs, the FKT message board at ProBoards.com and came up empty handed as well, presenting a rather interesting opportunity to set a Fastest Known Time for the course.

With injuries and other issues that have plagued my running in recent years, there hasn't really been a good opportunity for me to attempt this run and so I sort of forgot about it. However after attending a screening of a film about Hal Koerner and Mike Wolfe's FKT of the John Muir Trail, the desire to complete the LFT run was reignited. 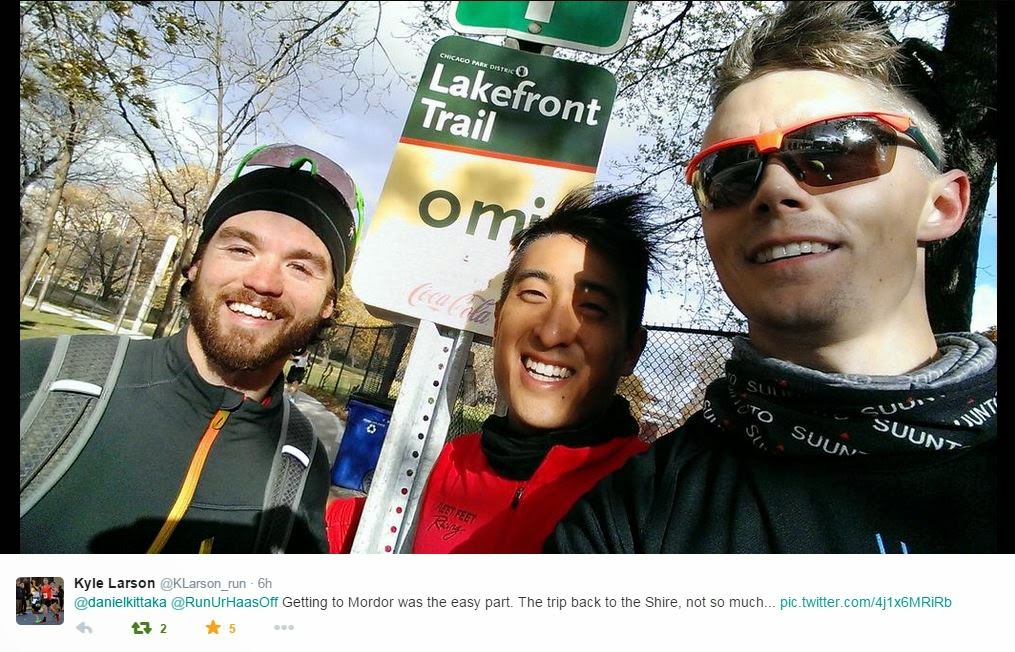 The Fellowship of the the Lakefront Trail at the 71st Street 0 mile marker
photo credit: Kyle Larson

I may have actually mentioned this desire at the screening to Kyle Larson, I don't recall exactly, but Kyle and I decided to make an attempt at this run following the Chicago Marathon. We were joined by Robby Haas, Kyle's coworker, and together we formed the Fellowship of the Lakefront Trail. I'm pretty indebted to these gentlemen as it would have been a pretty awful time running 36 miles of pancake flat, windy trail solo.

I had plotted a course beforehand, taking into account some of the construction on the path however these plans changed quickly after massive waves eroded parts of the Trail on Friday, October 31st and continued to pose a safety hazard near Oak Street Beach. We did our best to adhere as closely as possible to the posted mile markers, but deviated slightly at Oak Street in order to stay safe: 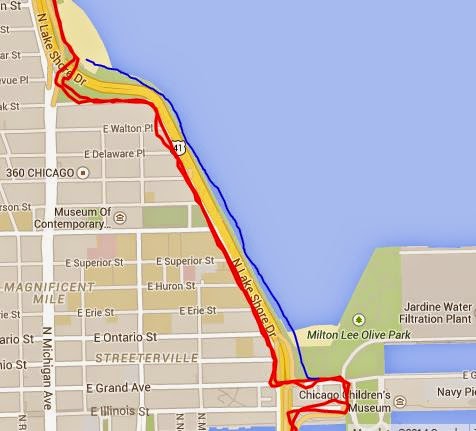 Other than attempting to adhere to the marked path as much as possible, our other rule was that we couldn't use each other's first names for the duration of the run. With transgressors buying the named person a drink for every offense. I devised this rule in order to provide a little entertainment particularly in the early miles where we'd be feeling good, with the wind, and still able to chat. As a result, each member of the Fellowship was awarded several nicknames:

Kyle became Swishy (because of the sound of his pack), Coach K, and Smeagol (see below)

Robby was 'Zoo (because of his hometown of Kalamazoo, MI) and Sam (see below)

I ended up with the nickname Frodo (my balaclava which I wore mostly around my neck formed a hobbit-like hood and as the primary timekeeper, my Suunto Ambit 2s became the Ring)

We collectively became the Fellowship of the Lakefront Trail, running to Mordor (the southern most point at 71st Street) and back.

Starting our run just as the sun was rising, with the still-strong winds from the northeast, we ran comfortably for 18 miles. The temperature was in the low 40s, keeping us quite cool. I took my gels according to my usual marathon cadence of about every 7 miles.

Once we turned, we faced 18 miles more or less into constant wind. As you might imagine, things got a bit tougher here. It was more difficult to stay warm and we were already 18 miles into our adventure. Other than finishing, the highlight of the second half was spectating the Lakefront 50/50. My friend, Eric Baum outsmarted the wind and the competition to win at the 50k distance!

"But do you remember Gandalf's words: Even Gollum may have something yet to do? But for him, Sam, I could not have destroyed the Ring. The Quest would have been in vain, even at the bitter end. So let us forgive him! For the Quest is achieved, and now all is over. I am glad you are here with me. Here at the end of all things, Sam." [Frodo, p.947, The Return of the King]

While we ultimately finished apart, it was a great comfort to have the Fellowship along with me. For the 36.55 mile course, I kept my watch running from the first step to our last (including a bathroom break at St Joe's on Diversey and multiple water bottle refills), taking splits as each of us finished our runs at the Hollywood 0 mile marker.


One last nerdy note: It is interesting to see that for a very small population size, there is an inverse relationship between the total times of our 1600m Fleet Feet Racing Time Trial on Wednesday and our LFT run on Saturday: 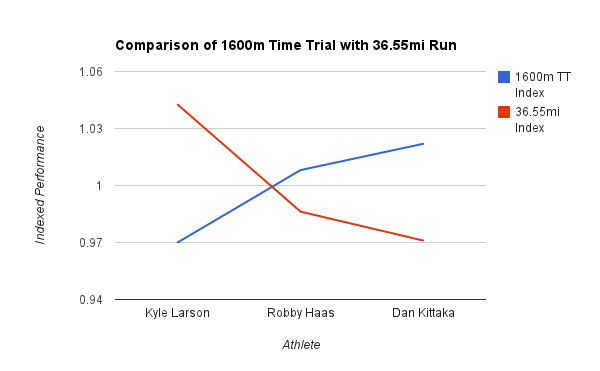 *where 1 is the average of performance of the population

What are your "just 'cause" running goals?

Also help us build knowledge of the LFT. If you're aware of point-to-point-to-point times, please post on the boards!

Posted by Dan Kittaka at 7:01 PM No comments: