After running my fastest marathon in four years at Grandma's last year, I decided to return to Duluth for the marathon again in 2015. As I was already signed up for the Garry Bjorkland Half and the Marathon still had open spots, this was a relatively easy transition. I switched a week or two after Boston. While I was healthy coming off of my Boston Marathon, I wasn't particularly satisfied with my performance and had long entertained running Grandma's again in 2015 if Boston didn't end up going as well as I would have liked. 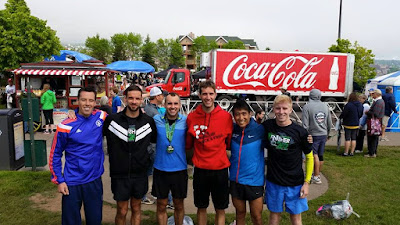 Training between Boston and Grandma's was a little rocky. As with each training cycle, things change and this one was unlike last year's mini-cycle between Boston and Grandma's and unlike the cycle I did between Chicago and Dallas in 2010. Unlike my two prior experiences, with the 8 week turnaround between marathons, I could feel my motivation lag and doubt creeping into my mind as the weeks progressed. One of the big factors here was tweaking my left arch a two weeks after Boston. I wasn't nearly as sore this year and returned to running a little too aggressively. I also started doing hops and strides in an effort to find my speed and strengthen my calves which had given out in Boston. Perhaps the introduction of this stimulus also played a role in my arch issue. Anyway, it's difficult to motivate yourself to train hard when you're constantly dealing with a nagging injury. For future reference, when dealing with a nagging injury, take a break or train without fear. Continuing to run with a nagging injury that isn't improving doesn't have to be the end of the world if you're able to more or less maintain training at a high level. If you're compromising your training, you aren't going to achieve your goals, your motivation will suffer, and you're probably better off resting and recovering.

Note: This is more for my own reference, in no way am I advocating you train through injury. Ten of ten times I would tell you to back off and rest, particularly immediately following a decent marathon goal race and a hard training cycle. But the rules are different for me. Ha. ;)

I know this is supposed to be my 2015 Grandma's Marathon Recap.

The one good week of "training" I had was probably also one of the dumbest weeks of running I've ever attempted (100+ mile weeks included). It began Sunday, May 17th, at the Cellcom Green Bay Marathon (my BibRave review), with pacing the 3:00 group, running 2:59:26, on a really humid day where only 18 people broke three hours. After taking Monday and Tuesday "off" (I "only" rode 17 miles+ to/from work), I returned to running Wednesday the week following Green Bay. Still feeling elevated soreness in my left arch, Thursday, I raced the JPMorgan Chase Corporate Challenge representing team Shure for the second year! While the event was fun, the race was a struggle. I only managed 19:05 for 3.5 miles, 10 seconds slower than the prior year.

At this point, you're probably thinking, "Serves you right, Dan." I was just warming up!

After an "easy, recovery" run on Friday, it was time to race again. This time it was Fleet Feet Sports' Soldier Field 10 Mile. Despite barely averaging sub-5:30 pace for 3.5 miles, I had it in my head that I could probably average sub-5:40 pace for 10 miles. My gut told me that if I slowed down just a bit from the pace I ran at Corporate Challenge, I'd be able to hold it for the 10 mile distance. Marathon training does weird things to your physiology (and psychology, ha). Sure enough I was able to finish just seconds off my 10 mile PR set at Soldier Field in 2011, running 55:37 for 24th in a deep field.

Capping a very odd 7 day stretch of with a near PR performance over 10 miles probably indicates that my 10 mile PR is pretty soft but also gave me some much needed confidence that Grandma's Marathon wasn't going to be a total bust as my races, workouts, and long runs with the exception of Green Bay had not gone well.

Fast forward to several days before Grandma's Marathon. I hadn't had a great workout since Soldier Field, but was feeling pretty strong and confident something like 5:50-low pace was totally doable after averaging 5:34 pace for 10 miles. I planned to go out a little faster than last year, somewhere around 1:17:00 versus 1:17:45. After running a -2:04 negative split in 2014, I knew if I were to run faster than the year prior, I'd need to get out a little harder in 2015. I also had the though flash through my mind, "2014 was pretty much about as good as it could have been. It's highly unlikely 2015 will go quite as well." I don't think this is necessarily negative thinking as much as being realistic and preparing for the potential for things not to click quite as well as the year prior.

Sure enough, things didn't quite feel as good in 2015. While we started in a downpour, the rain lightened up so as not to be much of a factor for me pretty early in the race. I ran with a group that included the 6th, 7th, and 8th place women at the time as well as my friend Ben Kampf for many of the early miles, we were on a fairly hot pace, running 5:45s which was kind of my average goal pace. I told myself it was the incline variation and that I might be having a decent day.

After reaching halfway in 1:16:48, I could tell a negative split was out of the picture. Discouraged, I considered slowing to meet up with a group of friends who were trying to break 2:40. 13 miles is a long time to run when you know you aren't going to reach your goal. After a mile or so, I snapped myself out of my malaise and told myself to just focus on running as close to 5:50 pace as possible, taking each mile at a time. I strung together some decent miles and kept the slowing to a minimum until mile 22. After mile 22, I had one downhill 6:11 but the rest of my miles were about 6:20 pace. I wrote in my log, "Death by 1,000 paper cuts." 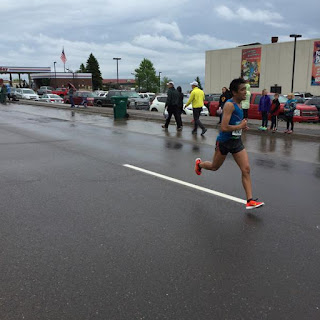 While my 2015 Grandma's Marathon wasn't the 2:33 I was hoping for, 2:36 and my 3rd "best" positive split ever (+2:40 on the second half) isn't the worst possible outcome. More importantly, I like to think choosing to stick with the race was a good character and race-skill building opportunity. I've found that it can be easy to check out physically and mentally when things aren't going as expected or desired, but often (not always, but often) staying positive and continuing to work towards your goals is still valuable. I suppose some people would call this "heart."

Weeks prior to Grandma's I was really looking forward to taking a break from running mostly because I wasn't really running well and my left arch wasn't getting better while training on it. I'm on day 7 of 14 planned days without running. I have been bike commuting, but this first week was pretty much a complete rest week. I'd like to reintroduce some light strength and stability work next week in preparation for returning to running and ultimately 12 hard weeks of training for the Chicago Marathon. My top priority is to get my left arch to a place where it doesn't hurt as much. So far, it's improved significantly, but is still sore. Hopefully another 7 days will do the trick.

Some Qs for yous:

What are your mental processes when you know mid-race that your goal is out of reach?

How do you spend your time when taking a break from running?
Posted by Dan Kittaka at 1:06 PM 4 comments: